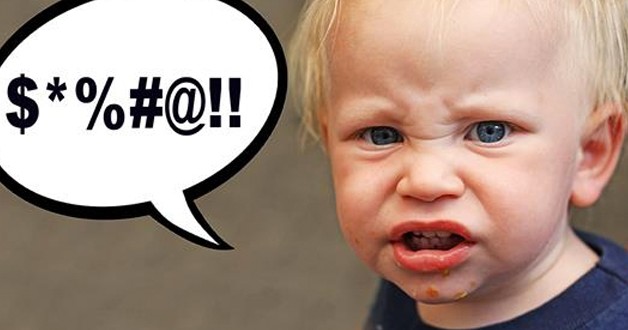 We’ve all encountered children who just can’t stop using naughty words to get a reaction, it may be simple potty talk or it may be full blown swearing. Here are some tips to get rid of naughty talk so it doesn’t become a habit.

Most children engage in swearing as a way of getting attention from parents, friends, or classmates. One helpful way to get rid of this is to make sure your child is receiving attention for positive behaviour such as good grades or being a good friend. Children who are able to get attention in these ways are less likely to resort to swearing.

Taking away the shock

When your child is young it’s a good idea to teach them appropriate names for body parts and use them in conversation without making a big deal. Normalising it and not over-reacting when children use inappropriate words are great ways of both showing your child that they are not going to get attention from it but also that they don’t need to resort to potty talk.

Where did they learn it from

If your child is using swear words it’s always good to ask where did they learn that word from? Children may pick up words in the playground but they also may have learned it via TV, internet, or other sources of media. Things like child locks are great for those channels that are likely to display course language. Where exposure is unavoidable it’s also a good idea to set clear boundaries and let children know that whilst they may hear it elsewhere it’s not something they are allowed to say.

Punishments should not be excessive and give children attention for their behaviour. Some suggestions are things like a swear jar, or having to look up a new word in the dictionary and use it in a sentence. Parents can also enact methods like simply ignoring the child and behaviour for a set period of time, or asking the child what they are angry about and if they would like to talk about it without swearing.

Being a role model

Sometimes you may kick your toe on a door or set the smoke alarm off accidentally and let some swears slip yourself. Whilst this is understandable it’s also important that you’re not setting a continuous example for your kids and engaging in a lot of swearing in front of them. Things like fowl language directed at particular people or casual use of swears in everyday speaking can rub off on your children but can also create double standards that make them not respect rules you’ve set around swearing.